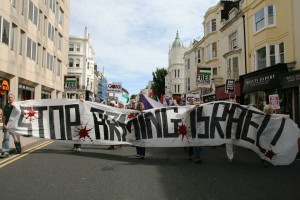 Join us for an afternoon of rememberance and protest.
We have planned two linked events.
You are welcome to join us for either or both of them.

This summer there have been rememberance events all over the world. On August 29th, it is Brighton’s turn.

3pm – 4pm: Remembering the people of Gaza
Assemble at the Clock Tower at 3pm for a dignified procession to Hove Peace Statue, followed by a scattering of flower petals in memory of the more than 2,200 Palestinians killed during the Israeli assault on Gaza one year ago.
Please bring red or white flowers to participate in this event.

This summer we recall Israel’s dreadful assault on Gaza one year ago. In July-August 2014, over 50 days of relentless bombing, 2,205 Palestinians (including 521 children) were killed.

This time last year, millions of people around the world gathered in their local areas to express their grief, their anger and their condemnation. 150,000 demonstrated on the streets of London on the 9th of August 2014, and over 1,000 marched through Brighton & Hove on consecutive weekends throughout the 50-day massacre.

Since a ‘ceasefire’ was announced, Israel has continued to attack Gaza. It refuses to allow essential building materials into the Gaza Strip, leaving the Palestinians unable to rebuild. Families continue to live among the rubble of their houses, without electricity or running water. Aid agencies report that malnutrition is spreading.

This summer there have been rememberance events all over the world. On August 29th, it is Brighton’s turn. This is an opportunity for the people of our city to remind the people of Gaza that they are not forgotten. And we remind our own government, and British business, that we will not rest until an arms embargo of Israel is in place, and until UK big business divests from the Israeli military machine.

Stop exporting arms to Israel!
Many of the deadly weapons used by Israel against the people of Gaza were sold to Israel by arms manufacturers in the UK, with the active endorsement of the UK government. In 2014 alone, UK arms exports to Israel were worth £40 million.

Stop importing arms from Israel!
Israel is one of the leading arms exporters in the world. It is able to make huge profits from arms sales, including to the UK, because it markets its weapons as ‘battle tested’ – primarily against Palestinians in Gaza and the West Bank.

The UK government is complicit in Israel’s crimes against the Palestinian people, and will continue to be so as long as it trades arms with Israel. We demand that this trade stop immediately.

Barclay’s will only divest from the deadly arms trade if its customers show that they disapprove. This tactic worked in the case of Barclays’ investments in Apartheid South Africa in the 1970s and 1980s, and it can work in the case of Israeli war crimes now.

If you’re a Barclays customer, close your account and tell the company why you have switched to a more ethical bank such as the Co-operative Bank.