Brighton and Palestinian Artists Together presents 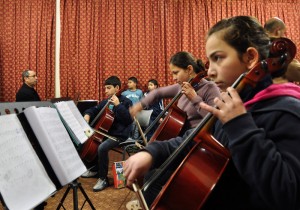 Our supporters will know that we have invited children from the Edward Said National Conservatory of Music to play in Brighton Fringe 2016. Four of these children are students at the Gaza Music School and three of them are students at ESNCM branches in the West Bank. Earlier this year we launched a fund-raising appeal, which raised an astonishing £7,319, surpassing our initial target of £6000. More is still needed if we are to achieve our aim, so please join us for an evening of music and comradeship to support this exciting and worthwhile project.

2. Between Bach and Baghdad
Performed by Manfred Leuchter (Accordion)

Cake and wine at the interval

Entrance is free – Donations will be invited

KALAMUS
Dirk Campbell is a composer and performer in film and television. Paul Johnson performs regularly at the Globe Theatre. Adam Campbell is studying music at Northbrook College.

Kalamus specialise in creating new music from ancient sources. At the concert, they will play traditional music from the near East, China and Africa. Instruments featured include duduk, kava, bawu, kora, nyatiti and gimbri. 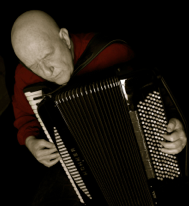 Manfred Leuchter has been travelling all over the world for decades with his instrument: the accordion. A musical global player, he experiences many special encounters which often result in exciting new projects.
www.sparito.de