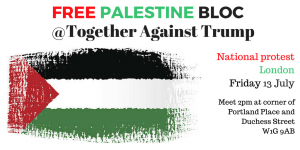 Donald Trump – no friend of the Palestinians – will visit the UK at the end of this week. The ‘reception’ planned for him looks to be substantial. In addition to a local demo in Brighton on Thursday (July 12th), many of us will be going to London on Friday (13th) in response to the call from national PSC and other Palestine advocacy groups (and indeed pretty much all groups concerned with human rights, equality and social justice). See below for the case against Trump from the perspective of Palestine Solidarity.

London, Friday 13 July
Meet up at Brighton station at 12.00 mid-day to catch the 12.33pm train to Victoria, and thence to Oxford Circus tube station
Join the ‘Free Palestine’ bloc at 2pm
Corner of Portland Place and Duchess Street, W1G 9AB (and then march to Trafalgar Square)
https://goo.gl/maps/se2zBMvxwaQ2
Facebook page here

Join us to protest Trump’s visit in London, in light of his decision to move the US Embassy to Jerusalem and his ongoing denial of Palestinian human rights.

From War on Want: TOP TEN REASONS TO MARCH TOGETHER AGAINST TRUMP ON 13 JULY

Why are advocates for the Palestinians protesting over Trump’s visit to the UK?

Most people know that Donald Trump is no friend of the Palestinians, and is a fanatical supporter of the apartheid regime in Israel. People know that he has moved the US embassy from Tel Aviv to Jerusalem, in a blatant gesture of solidarity with the racist Israeli regime, and a blatant repudiation of Palestinian aspirations and human rights, international law, and the great majority of countries in the international community.

People may not know that he has appointed David Friedman as American ambassador to Israel. Friedman is on record as being a passionate supporter for the most extreme right wing in Israel, and has called for Israel to formally annex Palestinian land illegally occupied by Israel.

But perhaps the most important reason to protest at Trump’s presence in the UK is that the United States is Israel’s main arms supplier, sending weapons that are routinely used to commit human rights violations. Under Trump the USA has gone further still, cutting $3 billion in aid for the education and health of Palestinian refugees. The USA is also blocking all attempts to investigate the killings of 110 Palestinians, including children, medics and journalists, and the brutal repression of thousands of Palestinian protesters during the Great Return March.

The UK abstained from the UN Human Rights Council vote on launching an investigation into the killings. The UK also remains complicit in ongoing human rights violations as it refuses to stop arms sales to Israel, even though they breach its own human rights guidelines. UK banks and financial institutions – in particular HSBC – also hold billions of pounds worth of shares in companies that sell weapons, military equipment and technology to Israel.

So, join us in saying “Donald Trump, you are not welcome in Britain!”