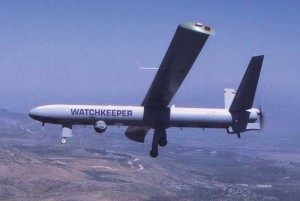 Sussex Stop Arming Israel are calling on campaigning groups in London and the South East to endorse, publicise and come along to this demonstration to give a clear message to Thales that:

The UK’s Watchkeeper drone has been developed under a £1 billion joint venture contract awarded by the Ministry of Defence to Thales UK and Israel’s Elbit Systems, allowing the UK military to benefit from technologies that have been ‘field tested’ on the Palestinians.

The Crawley factory is one of Thales’s largest facilities in the UK.

The Watchkeeper drone project illustrates the collaboration between the UK government and Israel, and the joint working between private arms companies from both countries.

The demo outside the Thales arms factory in Crawley on April 8th will be an important part of the campaign for a two-way arms embargo against Israel, as called for by the Palestinian BDS National Committee:

“A comprehensive military embargo on Israel is long overdue. It would form a crucial step towards ending Israel’s unlawful and criminal use of force against the Palestinian people and other peoples and states in the region and would constitute an effective, non-violent measure to pressure Israel to comply with its obligations under international law.” http://bdsmovement.net/activecamps/military-embargo

These are critical times for Palestinians.There is evidence that Israel, supported by its ever-belligerent US backers, is planning another murderous attack on defenceless Gaza civilians, in tandem with its brutal attacks on Palestinian resistance in the Occupied West Bank.

Bring banners and other displays for a lively visual impact at the factory’s surrounding fence!

Stay tuned to the Sussex Stop Arming Israel website for further details and thanks for your support.