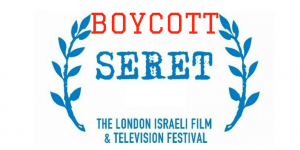 The film being screened at Duke’s @ Komedia may be a fantastic film.
That’s not the point.
The point is that the Seret Festival is being financed, and used, by the Israeli government to ‘art-wash’ Israel’s appalling human rights record, and its long history of flagrant violations of UN resolutions and international law.

We need a big turnout  – please join us, and spread the word!