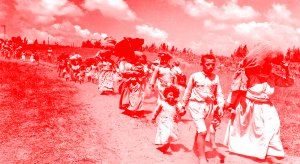 Join us for a vigil and commemoration of the Nakba.

We’ll hold a vigil for about an hour, to demonstrate our solidarity with the people of Palestine, and to remind the people of Brighton of the continuing catastrophe for the Palestinians.

Al-Nakba is Arabic for ‘the Catastrophe’ . . .  the word Palestinians use for what befell them 71 years ago, as a consequence of the founding of the state of Israel in 1948.

In 1947 the UN handed 55% of the land to the proposed new state of Israel, prompting violent ethnic cleansing of the native Palestinian people  – the Nakba.

Between 1948-9 Jewish nationalist militias destroyed over 400 Palestinian villages and towns. They conducted at least 24 brutal massacres of civilians. One of the most notorious was in the town of Deir Yassin, where 100 Palestinians, including women and children, were murdered. In total 13,000 Palestinians died.

720,000 people (85% of the Palestinian Arab population) were driven or fled from their towns and villages to neighbouring Syria, Lebanon, Jordan, the West Bank and Gaza.  Over 4 million acres of the land they left behind—and still had title to—were seized by the Israeli state.

This is why Palestinians still recall those times as ‘the Catastrophe’

Although Israeli citizens, they remained subject to discrimination and dozens of discriminatory apartheid laws to the present day, as well as suffering house demolitions, displacement of villages and confiscation of land.

To make room for these settlements, Israel forcibly evicts Palestinians from their legally held land and demolishes their homes. The most fertile land and water resources are appropriated by the settlements for agriculture (exporting some produce abroad).

The Palestinian Right of Return 71 years on
Palestinians are historically one of the biggest groups of refugees in the world. Some 1.5 million still live in the camps in neighbouring countries to which they fled during the Nakba. There are now over 5 million descendants of the original Palestinian refugees living in the diaspora around the world.

As refugees they have a legal right to return to their homeland – enshrined in international law and confirmed in numerous UN resolutions. Even though every Jewish person worldwide can move to, and settle in Israel, 71 years after the Nakba, the Israeli government still consistently refuses Palestinians any right of return.