Saturday November 29th is UN Day of Solidarity with the Palestinian people. In Brighton we will be joining the UK-wide Stop Arming Israel day of action, to pressure the UK government and British companies to end all relationships with Israeli arms companies and to end all forms of military cooperation with Israel. So far we know of around 30 other groups around the country who will be joining the Day of Action.

In this way we can actively stand in solidarity with Palestinian people, and we appeal to everyone to join us and circulate this call-out to others who may be interested. 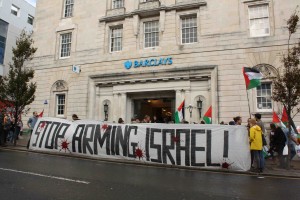 Things you can do to make the day even more effective:

Why is this demo important?

During July and August 2014, 2,150 Palestinians were killed as Israel carried out another massacre in the besieged Gaza strip. Entire neighbourhoods were destroyed and mosques, market places, UN relief compounds and schools were deliberately targeted. There was no safe place for the 1.7 million people in Gaza to take shelter from the Israeli bombardment.

This massacre was carried out with the support of weapons exported from the UK and by companies in which UK companies are invested.

In 2011 a group of grassroots Palestinian groups called for a two-way military embargo on Israel.

The Palestinian Boycott, Divestment and Sanctions National Committee wrote at the time: “A comprehensive military embargo on Israel is long overdue. It would form a crucial step towards ending Israel’s unlawful and criminal use of force against the Palestinian people and other peoples and states in the region and would constitute an effective, non-violent measure to pressure Israel to comply with its obligations under international law.”

During the summer, hundreds of thousands of people marched to demand a military embargo on Israel. Occupations were held at the the offices of UK government departments and companies with links to the arms trade. These grassroots actions contributed to the UK government announcing that it was considering suspending 12 licenses for arms exports to Israel.

Yet the UK government has so far failed to take any action to curb the arms trade with Israel, and many UK companies continue to support and profit from Israeli militarism.

Join us in a UK-wide day of action to keep the pressure on the UK government and to expose the complicity of the companies that help Israel to commit its massacres.

We are calling on people to take action on the 29th November, including in the following ways: