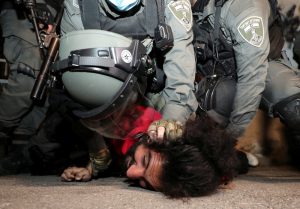 Once again, Palestine is in crisis – as you’ll have seen in the news. More info below. Please join us for a socially-distanced rally at the Clock Tower to demonstrate our solidarity with the people of Jerusalem. This will coincide with protests in London and in other parts of the country. We’re calling for a strong turnout so that our comrades in Jerusalem can see from social media that they are in our thoughts, and to call on the UK government to do more than express its ‘deep concern’.

As Palestinians protest in Jerusalem against these evictions, and Israel’s ongoing programme of ethnic cleansing, Israeli forces have responded with brutality, including an assault on worshippers at Al Aqsa Mosque that has wounded hundreds.

Backed by the state and its discriminatory laws, settler groups have claimed ownership of the land in Sheikh Jarrah and implemented a creeping takeover of Palestinian homes, aided and abetted by Israeli courts and the security forces.

The plans to forcibly dispossess the families is part and parcel of Israel’s attempt to alter the demographic balance of the city, by ethnically cleansing Palestinians, while simultaneously providing financial and political support for illegal Jewish-only settlements built on stolen Palestinian land.

The UK government must take immediate action and stop allowing Israel to act with impunity. It must demand an end to current proceedings to evict these families, and start holding Israel accountable for all its actions, which contribute to the crime of apartheid. This includes through implementing sanctions, and banning the import of goods from Israel’s illegal settlements.

In the face of Israel’s brutal crimes, we can’t remain silent! Come together on the streets to demand our government take action.