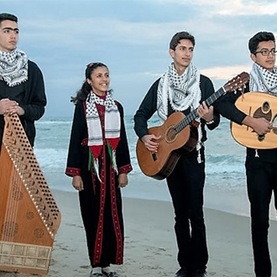 A unique opportunity to hear some of the best young musicians from the Gaza Music School, part of the Edward Said National Conservatory of Music. They will perform classical and contemporary Middle Eastern music with the support of the Oriental Music Ensemble. Full details below.

For further information and booking details go to the Brighton Fringe website.

Background
At his Brighton concert in May 2014, Palestinian Oud maestro Ahmad Al Khatib said that his dream was to play in a concert in Brighton with children from the Gaza Music School. The audience and the organisers of the concert took this dream seriously and a fundraising campaign to finance the visit by young musicians from the Gaza Strip started in May 2015. Thanks to the generosity of our supporters, the concert is now a reality.

The Gaza School of Music was established in 2008 by the A.M. Qattan foundation under the academic supervision of the Edward Said National Conservatory of Music.  In 2012, the ownership of the Gaza Music School was given by Qattan to the ESNCM and thus became its 5th branch in Palestine. For the first time, a structured musical education was made available in Gaza for children aged 6 to 16. There are now over 200 enrolled students who are learning to play both Palestinian instruments, including the Oud and Qanoon, and European instruments, including the piano, cello and violin. The Music School miraculously survived the devastation which happened in 2014, having previously been re-built after the bombing raids of 2009.

The Oriental Music Ensemble is one of the finest contemporary Palestinian music groups. Founded in 1997 by teachers at the Edward Said National Conservatory of Music, the Ensemble has performed extensively in Palestine, in the Middle East, in Europe and in the USA. The instrumental Ensemble performs authentic classical Arabic music of the Middle East with influences from the larger Orient. Their repertoire includes uncommon rhythms and improvisation that give their concerts a special dynamic quality. The instruments used by the Oriental Music Ensemble are acoustic and mostly handmade, including Oud, Qanoon, Ney, Buzuq, Durbuka, Daff, and Mazhar as well as the Clarinet played in the Oriental style. The core musicians of the OME are: Suhail Khoury (General Director of the ESNCM) on Ney and Clarinet, Ibrahim Atari on Qanoon, Youssef Hbeish on Percussion as well as Oud player Ahmad Al Khatib.

If you would like to contribute to this event, please make cheques payable to “BHPSC Concert” and send to BHPSC, 39-41 Surrey Street, Brighton BN1 3PB or make a donation via PayPal using the ‘Donate’ function here on our website.