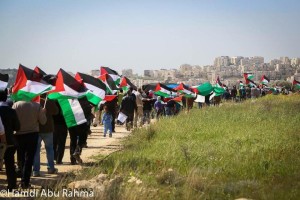 **CANCELLED**
Iyad Burnat has contacted us to say that he has reluctantly cancelled his UK tour in September. At the regular weekly protest in Bil’in on Friday 28th Aug, Iyad was arrested and detained, during which time he was badly beaten. Iyad tells us that they broke two ribs and his body is covered in bruises. He has been released and is now back home, but he has been advised by doctors that he must rest for at least four weeks and has reluctantly cancelled his UK tour.

Report from the frontline:
Non-violent protests against military occupation and the Wall

Iyad Burnat, Coordinator of the Popular Committee in Bil’in, Palestine

Iyad Burnat is the coordinator of the Popular Committee in Bil’in, Palestine, a small farming village 7 miles west of Ramallah in occupied Palestine. For over 10 years, Iyad and the Popular Committee have organised weekly demonstrations against the illegal Israeli “Wall” that has taken their farm land, olive trees and livelihood.

Iyad’s brother, Emad, co-directed the award winning documentary, FIVE BROKEN CAMERAS, which recorded the village resistance to Israel’s brutal oppression. The village has suffered several deaths and many severe, permanent, injuries. This past summer Iyad’s 15-year-old son was shot in the leg by an Israeli military sniper, severing a nerve and he is still requiring medical care.

Iyad will describe what life is like under Israeli occupation and his village’s ongoing struggle for justice, human rights and freedom. He will talk about what inspires him to continue non-violent resistance. Photos and videos will accompany his presentation and he will be available to answer your questions.

We are very pleased to welcome Iyad to Brighton as part of his UK visit. Please come along and bring your friends and circulate the information widely.