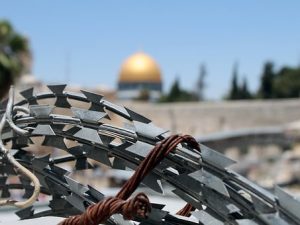 After 70 years, Donald Trump did on Wednesday what no previous US president has done – recognise Jerusalem as the capital of Israel.

The announcement has sparked anger and protest across the Middle East while being welcomed by Israeli Prime Minister Benjamin Netanyahu and supporters of Israel.

Leaders in Gaza and the West Bank have called for a strong response, with protests in Jerusalem, the West Bank and Gaza. Israeli soldiers were deployed in anticipation of unrest.

Around the world this weekend, outrage will be expressed by people of conscience who see Trump’s announcement for what it is – a blatant vote of support by israel’s strongest backer for the zionist expansionist project, and in particular the colonisation and ethnic cleansing of Palestinian East Jerusalem.

In Brighton we will add our voices to those in Palestine and around the world. We may not reverse Trump’s reckless repudiation of human rights and international law, but at least we can show our comrades in Palestine that we stand with them.

Join us at the Clock Tower from 12 till 2pm on Saturday.