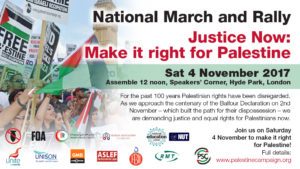 To get to Grosvenor Square from Victoria Station in London:
No 36 bus to Park Lane or Underground to Marble Arch or Bond Street stations
(or travel with others as outlined below)

For people local to Brighton:
Meet up at Brighton railway station at 9.45am to catch 10.28am train to Victoria

For the past 100 years Palestinian rights have been disregarded. As we approach the centenary of the Balfour Declaration on 2nd November – which built the path for their dispossession – we are demanding justice and equal rights for the Palestinians now.

This is going to be one of the biggest UK demonstrations for Palestine in several years – it’s an opportunity for the people of Britain to demand that British complicity in the dispossession of the Palestinian people must end now.

More info (including a video) on the national PSC website.

We’re hoping that local people will travel to London together and then march together behind our BHPSC banner. We’ll be catching the 10.28am Victoria train from Brighton, so let’s meet up at 9.45am to arrange group tickets for anyone who has not already bought tickets.

Speakers at the rally will include: