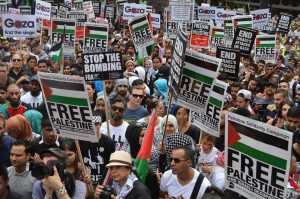 On the 2nd anniversary of the 2014 assault on Gaza, join PSC to demand that:
– Israel ends its 10-year siege of Gaza
– The UK ends its arms trade with Israel

Two years after Israel’s last major assault on Gaza, which killed over 2,200 Palestinians, Israeli authorities continue to deny the entry of basic reconstruction materials to the besieged Gaza Strip.

Hospitals don’t have essential supplies, unemployment is rife and Gaza’s children are severely traumatised after years of siege and brutal military assaults. This can’t go on.