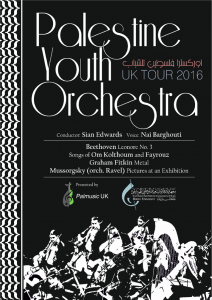 The Triumph of Youth & Talent – The PYO makes its UK debut
This summer the Palestine Youth Orchestra (PYO) leaves the troubled olive groves of Palestine to tour Britain for the first time. Following a critically acclaimed performance by a smaller ensemble of the PYO (the Palestine Strings) with Nigel Kennedy at the BBC Proms in 2013, the PYO now embarks on its first ever UK Tour under the baton of Sian Edwards (Head of Conducting at the Royal Academy of Music), performing at world-class venues across the UK culminating with a concert at the Royal Festival Hall. Set against a backdrop of international political turmoil, these young musicians are poised to bring a message of inspiration and humanity to UK audiences.

Their final UK concert will be at the Royal Festival Hall, London on 1 August (Tel 0207 960 4200, www.southbankcentre.co.uk/whatson/the-palestine-youth-orchestra-97399) as part of the Southbank’s annual Festival of Love.

Equally at home with Western and Arabic music, the PYO has a unique position amongst youth orchestras internationally. It was established by the Edward Said National Conservatory of Music in 2004 with the vision of bringing together talented students from all over Palestine and the Palestinian Diaspora. Despite the daily obstacles they face, their drive and passion for music has entranced audiences in France, Germany, Italy, Jordan, Greece, Oman, Syria, Bahrain and Lebanon.

Unable to rehearse together as an orchestra at home, the PYO will be meeting and rehearsing at the Royal Conservatoire of Scotland between the 18th July-24th July 2016. They will be joined by the Palestinian singer Nai Barghouti, a rising star of Arabic music, and several students from leading British Conservatoires.

The concert programme will include:
Beethoven’s Leonore Overture No. 3
Arabic songs by Om Kolthoum and Fairuz sung by Nai Barghouti
Graham Fitkin’s Metal – energy packed, pop inspired and suiting the PYO’s youthful musical vigour.
Arabic improvisations in the PYO’s own trademark style
Mussorgsky’s Pictures at an Exhibition, the majestic orchestration by Ravel.

The PYO 2016 Tour will open at the state of the art Perth Concert Hall, 25 July (Tel 01738 621031, www.horsecross.co.uk/whats-on/palestine-youth-orchestra).
They will then perform at the International Society of Music Education conference at Glasgow Royal Concert Hall on 26 July (Tel 0141 353 8000, www.isme2016glasgow.org/outline-programme/ ).
The PYO move on to Leeds Town Hall on 27 July (Tel 0113 376 0318, www.leeds.gov.uk/townhall/Pages/Event.aspx?s=5447 ).
A concert in Birmingham Town Hall takes place on 29 July (Tel 0121 345 0600, www.thsh.co.uk/event/palestine-youth-orchestra/). While in Birmingham, the PYO will have a joint session with the National Youth Orchestra of Great Britain to explore music improvisation.
They will give a late afternoon concert at St David’s Hall, Cardiff on 30 July (Tel 029 2087 8444, www.stdavidshallcardiff.co.uk/whats-on/palmusic-uk-presents-palestine-youth-orchestra/) The orchestra arrives in London at the end of a weekend of events at the Southbank coming under the umbrella of ‘what the world needs now’, which will explore various themes of art linked to social change. Their final UK concert will be at the Royal Festival Hall, London on 1 August (Tel 0207 960 4200, www.southbankcentre.co.uk/whatson/the-palestine-youth-orchestra-97399) as part of the Southbank’s annual Festival of Love.