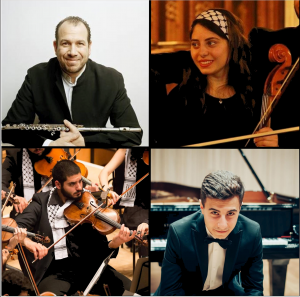 Palmusic UK wants to make a real difference to young Palestinians whose lives are affected by circumstances beyond their control. It champions the work of the Edward Said National Conservatoire of Music (ESNCM), the leading music institution in Palestine which has branches in Jerusalem, Bethlehem, Nablus, Ramallah and Gaza. It offers scholarships to Palestinian children and young people and contributes towards the consolidation of Palestinian identity.

In October 2014, Brighton and Hove Palestine Solidarity Campaign (BHPSC) hosted a concert by the Galilee Quartet during their Amnesty UK tour. Amnesty supported Omar Saad, the violist in the Quartet, who had spent 9 months in an Israeli prison for refusing to serve in the Israeli army.

In the summer of 2016, Tibah Saad (cello) and her brother Omar (viola) were awarded partial scholarships to study at the Royal Conservatoire of Scotland after the Head of Strings met the two talented students while they were on a UK tour with the Palestine Youth Orchestra. Tibah and Omar are playing to raise funds to enable them to continue studying at the Conservatoire in Glasgow. The UK Home Office will not issue a student visa until an applicant can pay their college fees. Tibah and Omar have to raise £10,000 each.

In the concerts they are giving during their reading week in February, they will be accompanied by Jordanian-Palestinian pianist Iyad Sughayer who is regarded as one of the Middle-East’s most promising young artists.

Also playing in this concert is Lebanese-Palestinian flautist Wissam Boustany whose charismatic stage presence brings tremendous power and subtlety to the music he plays. Wissam is a trustee of Palmusic UK.