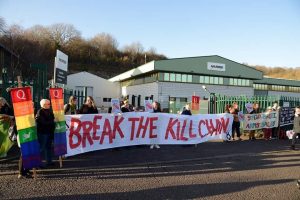 Come to the demo at the Arms Factory
Wed 6th November 4 – 6pm
EDO MBM Factory, Home Farm Road, Brighton, BN1 9HU
Gather at 3.15pm at Brighton Station to catch the 3.41 train to Moulsecoomb, or at 4pm at the factory.
Bring banners, placards, drums, sparklers, and as many friends and comrades as you can muster! Brighton says No!
Facebook event: https://www.facebook.com/events/598740487328840/

There’s a really big upsurge in opposition to EDO MBM arms factory in Brighton – from grassroots activists to local Councillors and MPs. Campaigners for justice for the Palestinians have a particular grievance against EDO MBM, as they make and supply components for weapons used by the Israeli armed forces against the Palestinian people – notably in Gaza.

A few years after the old Smash EDO campaign called it a day, it seemed like this local arms factory (owned by the 6th biggest arms corporation in the world) was starting to get away with profiting from human rights abuses and murder. This is now changing. We will not allow them to continue to act with impunity.

One year after the factory was granted planing permission to expand there is a growing coalition of activists and struggles ready to take action.