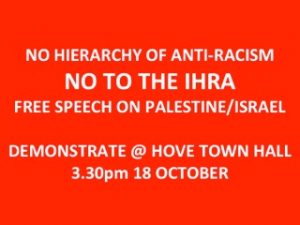 On October 18th, Brighton & Hove City Council will debate a proposal to ‘adopt’ the definition of antisemitism drafted by the International Holocaust Remembrance Alliance (IHRA).

BHPSC’s position – and that of many anti-racist organisations in the city – is that this proposal is misguided and dangerous. The case against IHRA is summarised below.

BHPSC will be joining with other community groups on Thursday to protest outside Hove Town Hall, making clear to all councillors arriving for the meeting that they must vote against the proposal, and that we will not be silenced on the injustice suffered by the Palestinian people.

Why oppose the adoption of IHRA?