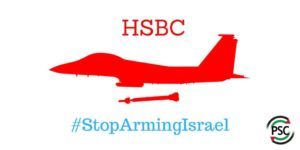 For over a year now, human rights groups around the country have been campaigning to raise awareness of HSBC’s complicity in Israel’s war crimes, and for HSBC to stop profiting from human rights abuses. On Saturday 15th September there will be a National Day of Action, with dozens of groups around the country protesting at local HSBC branches. In Brighton we’ll be at the main branch in North Street from 12 till 2pm. Join us!

At national level, Palestine Solidarity Campaign has posted this call-out:

We call for protests and campaigning around the country to accelerate the campaign for HSBC to end their holdings in arms companies like Elbit Systems, BAE Systems, and Boeing, whose weapons are used in the brutal attacks on Gaza and the rest of Palestine. 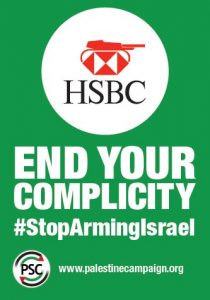 HSBC holds over £800m worth of shares in, and is involved in syndicated loans worth over £19bn to, companies that sell weapons and military equipment to the Israeli government.

Israel has intensified its bombing campaigns on Gaza yet again in recent weeks, and HSBC are a part of the chain of complicity. The attacks have been some of the most devastating since Israel’s bombardment of Gaza four years ago, when over 2200 Palestinians were killed in 51 days, including over 500 children.  Among those tragically killed in the recent attacks, were best friends Luay Kahil (16) and Amir al-Nimra (15) who took a selfie of themselves playing on an unfinished building in al-Katiba Square on 14 July, shortly before they were hit directly by an Israeli air strike. They had hopes of going to University and were, “Like twin brothers”, their mothers said.

These attacks have been supplementary to the ongoing massacres of Palestinian unarmed protesters in Gaza, where over 160 people have been killed by Israeli snipers in the last few months of the Great Return March, with thousands more shot and seriously injured.

There have been actions and protests up and down the country at HSBC branches and it is important we grow the movement now to pressure HSBC in to ending their investments in companies making billions from the sale of arms to Israel, and to end their holdings in Israeli Arms Companies like Elbit, who develop and sell their weapons based on them being “battle tested” on the besieged Gaza population.