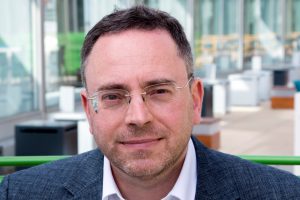 Robert Cohen is a forthright blogger and leading dissident in Jewish voices on Israel-Palestine in Britain, taking “a firmly Jewish but non-Zionist position” on the conflict. He says: “Our relationship with the Palestinian people is the greatest challenge facing Jews and Judaism in the 21st century.” He will describe the turning points in his own thinking, and comment on the behaviour of the Board of Deputies and past and present Chief Rabbi and in relation to Corbyn and the Labour Party. He will comment on the ‘definitions of anti-semitism’ debate in the UK and why he thinks the challenge for the Boycott movement is becoming ever greater.

Robert writes a monthly blog for Patheos under the title ‘Writing from the Edge’ and his work is regularly featured by Jews for Justice for Palestinians in the UK and at Mondoweiss in the United States. Robert spent ten years as a reporter and producer for BBC news and is now part of the corporate communications team for the Co-op.