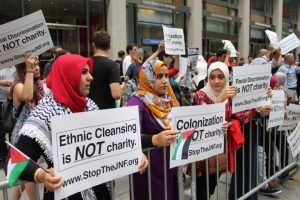 The JNF UK must be stripped of its charitable status!
The Jewish National Fund (JNF), set up in 1901, has played a key role in systematically taking over the land of the Palestinian people. A significant amount of the land seized from Palestinians was transferred to the JNF. Once land is in the ownership of the JNF it cannot be sold to Palestinians.

The Jewish National Fund, complicit in the ethnic cleansing of 1948, is still actively raising funds in the UK for further displacement of Palestinians. JNF projects in the Naqab, for example, continue to forcibly displace Palestinians as part of their ongoing ethnic cleansing.

Internationally, the campaign against the JNF continues
In the UK, the JNF enjoys official charitable status, despite having organisational links with the JNF-KKL in Israel. Campaigners are supporting a renewed appeal to the Charity Commission, by a dispossessed Palestinian family, which aims to get its charity status, and subsequent financial benefits, revoked. The case highlights the plight of a Palestinian refugee family, ethnically cleansed from their home in 1948, who still have the deed to the land now owned by the JNF.

Kholoud al Ajarma’s family were ethnically cleansed from the Palestinian village of Ajjur in 1948, and their land transferred to the Jewish National Fund. Her family still have the title deeds to their land in Ajjur, now “owned” by the JNF-UK. She complained to the Charity Commission that the JNF-UK should not be recognised as a charitable organisation. The Commission rejected her claim.

In a Tribunal, the campaign is contesting the Charity Commission decision that the JNF-UK is a legitimate charity. For more information about the deregistration campaign, click here.