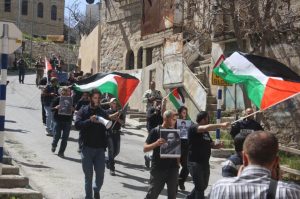 Sundus Azza, 25, is an activist from Hebron, Palestine. She lives a few meters away from an illegal Israeli settlement and faces regular harassment from extremist Israeli settlers. Her house has been vandalized and her and her family violently assaulted by settlers as well as soldiers. She has been a volunteer with Youth Against Settlements since 2008, documenting human rights violations as a media and activity organizer. She has a degree in English from Al-Quds Open University in English Language Teaching Methodology. She currently works in the Hebron Governor’s office to attend to the needs of the Old City – the primary target of the Israeli occupation in Hebron. In 2015, her brother was arrested and falsely accused of possessing a knife – he was subsequently released after a DNA test proved him innocent.

Youth Against Settlements is a Palestinian grassroots initiative to promote nonviolent community resistance against the Israeli occupation. The Open Shuhada Street campaign is an annual call to end the closures, restrictions, human rights violations, and occupation in the city of Hebron and all of Palestine.

Background
For 50 years Israel has occupied Palestinian land and in that time, Palestinians have faced numerous human rights abuses. Israel’s military rule disrupts every aspect of daily life. It affects whether, when and how Palestinians can travel to work or school, go abroad, visit relatives, earn a living, attend a protest, till their farmland or even switch on an electric light.

Israeli armed forces have long used excessive and often lethal force against Palestinian men, women, and children, to punish and stifle protest and dissent. Israeli military orders criminalise a wide range of peaceful activities, placing human rights defenders at risk of arrest and detention for their work in campaigning and advocating for the rights of Palestinians and against the military occupation of Palestinian Territories.

In Hebron, Youth Against Settlements mobilise young Palestinians to campaign against the Israeli occupation. Their annual Open Shuhada Street campaign highlights severe restrictions on freedom of movement that Palestinians face. BHPSC will be joined in conversation by YAS activist Sundus Azza, who will tell her story of her own activism, and we discuss the ways in which Palestinians resist Israel’s brutal and discriminatory occupation.