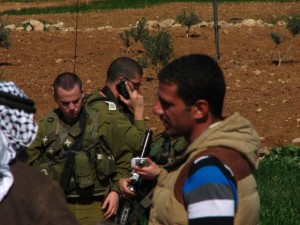 As part of a two-week UK tour, hosted by Brighton Jordan Valley Solidarity, Rashed Khudairi will be speaking in Brighton to update us on the current situation in the Jordan Valley and the work of the resistance movement.

Jordan Valley Solidarity is a network of Palestinian communities, which are collectively resisting Israel’s attempts to ethnically cleanse them through a strategy of ‘To exist is to resist’.

The threats to these communities are real and ongoing. They are refused the right to: build homes/schools/farm buildings; have running water or mains electricity, move freely between the Jordan Valley and the rest of the west bank; or farm the land which is historically theirs. They are under constant military surveillance, and regularly evacuated from their homes to make way for Israeli military training. On 27th April 2014 a senior IDF official admitted to a Knesset committee that military training in the Jordan Valley “is used as a way of reducing the number of Palestinians living nearby”.

In recent months the Israeli occupational forces have stepped up their repression at Hamra checkpoint, located on one of the main roads into the Jordan Valley. In January 2016, two men were shot and killed by IDF soldiers at Hamra.

Jordan Valley Solidarity challenges the occupation’s attacks on Palestinian communities by non-violent direct action: supporting those whose homes are demolished and helping them to rebuild; building infrastructure such as roads, water pipes and small schools; and supporting the international campaign for Boycott, Divestment and Sanctions.

It is essential that we continue to talk about the Jordan Valley, and highlight the occupation’s attempts to drive Palestinians from their land.