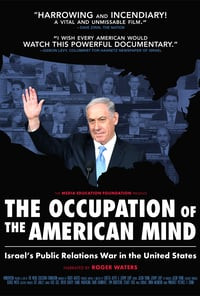 On the eve of Donald Trump’s inauguration as US President, we are pleased to be able to screen this important film.

Narrated by Roger Waters and featuring leading observers of the Palestinian-Israeli conflict and U.S. media culture, the film explores how the Israeli government, the U.S. government, and the pro-Israel lobby have joined forces, often with very different motives, to shape American media coverage of the conflict in Israel’s favour.

The film examines and suggests explanations for the history of US support for the state of Israel – a topic of urgently continuing importance to supporters of Palestine.

“One of the most compelling and important documentations in recent years.” – John Pilger

“Harrowing and incendiary! This is a vital and unmissable film.” – Dave Dirin, The Nation

“A remarkable achievement. Anyone who wished to understand the deeper reasons for America’s utter failure to bring peace to the region should begin by watching this powerful film.” – Avi Shlaim