Sadly we have had to cancel the Friday night meeting with Mahmoud Sarsak.

We received a message today  from the London organisers of his tour that he is suffering from severe exhaustion.

He  is obviously still suffering from the effects of his cruel 3 year prison detention and his debilitating hunger strike, and has just undertaken a punishing schedule on the first leg of his UK tour in Scotland.

This is obviously disappointing for his supporters here, but his well-being is the first consideration.

We wish him well, and hope that we can welcome him for a day of rest and recreation in Brighton at some point in his UK stay.

If you have mentioned this meeting to anyone, please let them know that it has been cancelled.

Obviously we will continue to work on the “Red Card to Israeli Racism” campaign.

For more information go to:

Mahmoud Sarsak, a member of the Palestinian national football team, was seized by Israeli troops, interned without charge and tortured over many weeks in Israel’s notorious prison system.

After three years without trial or charge, Mahmoud went on hunger strike. He was near death at half  his usual body weight when Israel released him unconditionally after a massive international campaign in his support. 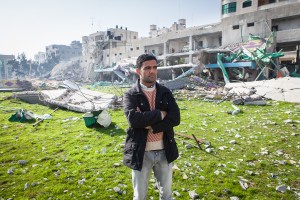 Photo: Sarsak in the bombed ruins of the Palestine football stadium in Gaza

Mahmoud is being  hosted at meetings throughout the UK, and participating in football events to raise awareness of Israeli’s war against Palestinians, the torture and abuse of Palestinian prisoners in Israel, and the role of multi-national G4S in running parts of Israel’s illegal imprisonment programme. He will be raising the cases of two players of the Palestinian national football team, Omar Abu Rouis and Mohammed Nemer, who have been imprisoned for over a year now in Israel without any trial or charges being levelled against them.

Israel has just staged the European Under-21 Championship, the biggest sporting event in its history. Those campaigning for UEFA to move the tournament elsewhere had the support of the former West Ham striker Frédéric Kanouté, Archbishop Desmond Tutu, film-maker Ken Loach and Michael Mansfield QC among others – all of whom signed a letter to a national newspaper protesting about the choice of venue. They wrote that: “UEFA should not allow Israel to use a prestigious football occasion to whitewash its racist denial of Palestinian rights and its illegal occupation of Palestinian land.”

A year ago Mahmoud Sarsak, once one of the leading players in Palestine, was reported to be close to death after 80 days on hunger strike in an Israeli prison. He had been arrested as he left the Gaza Strip on his way to a match in 2009 and held without trial or charge before being released. Palestine are members of Fifa but players are often denied exit visas to play in internationals abroad.

Football, though, now takes a secondary role in his life as he draws attention to the conflict in the land of his birth, and particularly focuses on the treatment of his fellow Palestinians.

“My position is that the UEFA championships should not be hosted in a country like Israel. Football is about respect, peace and sport. That is not what I experienced from Israel. It is about respecting other cultures as they come together in fair competition. Israel is looking to wipe out the Palestinian culture and and doesn’t respect them.”

When the football stadium in Gaza, where Sarsak once represented his homeland, was bombed politics defeated football. The same happened to Sarsak, but raising political awareness has replaced football in his life.

“I am not wanting publicity – just for people to know about the prisoners.”