The campaign against Sainsbury’s is reaching a crucial stage. The company’s AGM takes place in early July. A lively lobby of Sainsbury’s shareholders is planned. The aim is to force a debate in the AGM about Sainsbury’s continued business with suppliers based in illegal israeli settlements. Our argument is that this directly contradicts the company’s claim to be an ethical trader. This tactic eventually succeeded in the case of the Co-op. We want it to succeed with Sainsbury’s too. See here for more information.

The campaign is calling for a national day of action on Saturday June 27th, to put pressure on Sainsbury’s in the run-up to the AGM. Here in Brighton & Hove we’ve got an action planned, and we’re calling on all our supporters to ensure a good turnout. 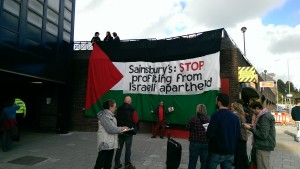 Our plan is to visit four of the ‘Sainsbury’s Local’ shops in central Brighton, with banners, leaflets etc. We’ll start with the Palmeira Square branch in Hove at 12 noon, then the Western Road branch (near ex-Ecostream) at 12.30pm, arriving at the Clock Tower at 1pm at the start of our weekly stall. We’ll then visit the North Street branch at 1.15pm, and finish at the St James’s Street branch at 1.45pm. Please join us for as much or as little of this action as possible – it should be a lively afternoon!