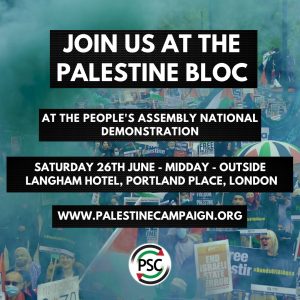 Join the Palestine Bloc at the People’s Assembly National Demo

The People’s Assembly National Demonstration is taking place on June 26th, marching from Portland Place (near Oxford Circus) to Parliament Square.
Join the Palestine Bloc as we come together to demand the Government take action for Palestine!

Travel plans from Brighton
Meet on the concourse at Brighton railway station at 10.15am.
Catch the 10.39am train to London Victoria, arriving Victoria 11.39am, then travel together to Oxford Circus to join the Palestine bloc.
Buy your tickets in advance online or allow plenty of time to buy them at the station.

Demo details
Assemble 12 noon outside Langham Hotel, Portland Place W1 (near the BBC and a short distance from Oxford Circus)
March due to set off at 1pm
Rally at Parliament Square from 2.15pm

The government continues to support the Saudi-led war on Yemen, has massively boosted arms spending, increased Britain’s nuclear arsenal and is fully behind Biden’s confrontational attitude towards Russia and China.

Join our bloc on the People’s Assembly National Demonstration as we demand freedom for Palestine, welfare not warfare and nurses not nukes!