BHPSC strongly encourages its members and local supporters to take part in the London march and demo called for Saturday by PSC, Stop the War, Friends of Al-Aqsa, CND, Palestine Forum in Britain, British Muslim Initiative, Islamic Forum in Europe and Muslim Association of Britain. More information here and below.

This is an important opportunity for everyone in the movement to march together, to tell the people of Gaza that they are not forgotten, and to unite around the current campaign to “STOP ARMING ISRAEL”.

The demo is called for 12 noon at BBC Broadcasting House in Portland Place, close to Oxford Circus. There will be a march to Hyde Park, passing the US Embassy.

The Brighton contingent will assemble nearby in Cavendish Square (behind John Lewis) at 11.45am, and will join the march as a solid bloc behind our banners FREE PALESTINE! and STOP ARMING ISRAEL!

Many of us will be catching the 10.19am train from Brighton. People wishing to travel together on discounted group tickets should meet on the concourse at 9.45am. Please make your own travel arrangements – BHPSC will not be organising tickets. Ticket queues and trains to London on Saturdays are busy, so try to arrive early.

The hope is that the demo in London will be the largest since the current crisis began. Brighton will play its part, so please join us! This is our focus of activity for the coming weekend – activities in the following week will be announced very soon, so please keep checking the website and social media. 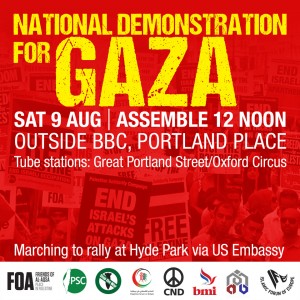