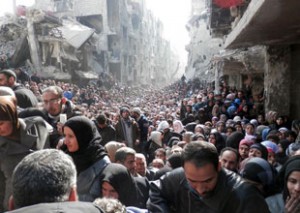 Yarmouk Palestinian camp in Syria has kept been under siege by the Syrian regime for 20 months, leading to deaths from starvation and because of lack of medicine. Conditions have worsened since IS invaded the camp on 1 April 2015.

The 18,000 residents left in the camp, among them 3,500 children, are trapped between sniper fire, barrel bombs and shelling and without food or medical aid.

Stand with them in asking the world not to turn its back and SAVE YARMOUK.

In response to calls from activists from Yarmouk, we demand all agencies with responsibility towards the Palestinian community in Syria, including the Syrian regime, the PLO, UNHCR, UNRWA and ICRC to ensure: