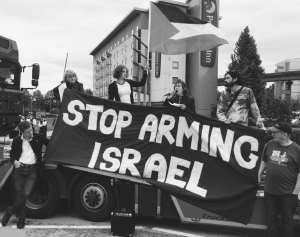 Kirsten Bayes has been involved with social justice and peace campaigning for some 20 years. She is currently organiser for the Stop the Arms Fair Campaign and a regular speaker for CAAT. She will speak on the history of the Israeli arms industry, drones as terror weapons, and how Israel’s arms are ‘battle-tested’ on Palestinians in the West Bank and Gaza. She will describe the role of this in boosting Israel’s export trade, and British involvement with the Israeli arms industry – through supply of components and purchases of weapons. And she will explain what WE can do – to expose and oppose the manufacture and sale of arms and components to Israel and Israeli marketing of arms through massive arms fairs in this country, and through the boycott of firms which supply, or support the supply of, weapons to Israel.

Mick Szydlowski is an activist with the Divest Elbit Campaign, which works to pressure investors to divest from this Israeli arms company. He writes: ‘When the activists got on the roof of Elbit last year, which closed the factory, it not only stopped production – it opened a lot of people’s eyes. Only a few knew that in the middle of England, in a lovely little village, an Israeli-owned company was making engines for drones being used by the Israeli armed forces helping in the deaths of over 2000 Palestinians – over 500 of whom were children, in Gaza last summer!’