Members of SmashEDO and Brighton Palestine Action staged an early morning visit to the main branch of Barclays Bank in Brighton this morning, drawing attention to Barclays’ complicity in the deadly arms trade – and in particular their investment in Elbit Systems, a huge israeli arms manufacturer that produces the drones used to kill and maim the civilian population of Gaza. 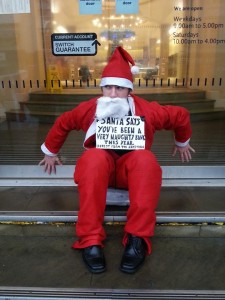 One demonstrator in a Santa suit, bearing a placard that read “Santa says you’ve been a very naughty bank this year: Divest from the arms trade” glued himself to the doors of the main entrance. Another locked himself to the side entrance. This prevented the bank from opening for business as usual at 9am.

The action sent a clear message to Barclays. Just as people pulled their money out of Barclays in the 1970s and 1980s in protest over the company’s investment in apartheid South Africa, Barclays’ current customers are switching their accounts to other banks as they discover the truth about the company’s complicity in israeli war crimes in 2014.

The demo was supported by local campaigners for a free Palestine, who gave leaflets to workers and shoppers, and raised banners saying “Blood Bank” and “Stop Arming Israel”. A number of local Barclays customers were shocked to hear about Barclays’ investments in killer drones, and committed themselves to switching to a bank with more ethical investment policy. 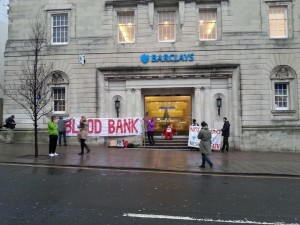 After about 45 minutes the police arrived and removed Santa from the front entrance, enabling the bank to open.

The demo was covered by the Argus.

For more on the local campaign against Barclays and Elbit Systems click here.