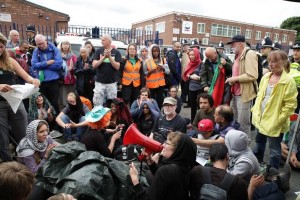 Several of our members took part in demos at Elbit Systems factories around the UK last Monday, helping to shut down all three of them to mark the one-year anniversary of Israel’s brutal assault on Gaza and to draw attention to the continuing deadly arms trade between Israel and the UK. A similar action took place in Melbourne in Australia.

You can read more about the demos here.

One of our members, who took part in the Shenstone protest, posted this report: 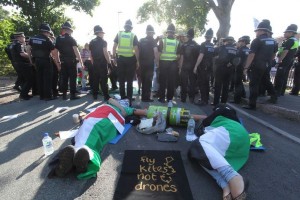 “We travelled up to the Elbit Systems drone factory at Shenstone today, joining an estimated 200 activists from all around the UK and as far afield as Brussels and Geneva.  The demo had begun early in the day, and when we arrived at 1pm, we learnt that the factory had taken out an injunction and the police had moved the crowd away from the area.  There were witness reports that the police had been pretty rough, some people had been slapped, and 19 arrests had been made. 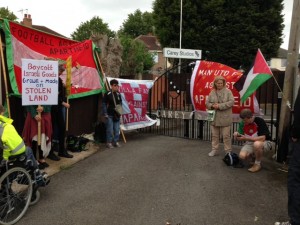 We stayed for a few final speeches, and then joined a group headed for Birmingham to lodge a protest against a dance school based there.  Carey Irish Dance Academy are planning to send an Irish Dancing commission to Tel Aviv for a festival in August.  There was a police presence at the studio when we arrived, and strangely the academy appeared to be closed – at 3pm in the afternoon!  Nevertheless we put up banners, played music and videoed the demo.  A phone call was made to the Studio and a message was left with them, calling for them to cancel their trip to Israel.  Further campaigns targeted at the Carey Academy are planned.” 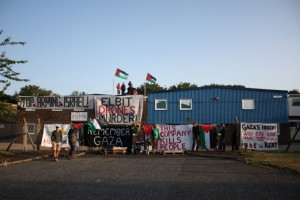 At least for one day, no killer drones were produced by these Israeli factories in the UK. But we’re campaigning for a total embargo on the two-way arms trade between Israel and the UK.