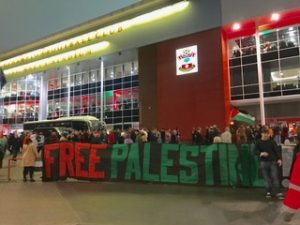 On 8th December there was an important protest as part of the Boycott Divestment & Sanctions campaign and specifically Red Card Israeli Racism.

Southampton FC were playing Hapoel Be’er Sheva in the Europa League at St Mary’s ground in Southampton. Around 100 protesters were there (including 14 from BHPSC)  demanding that Israel be kicked out of UEFA – the European football body.

The protest organised by Southampton PSC and Football against Apartheid included banners, Palestinian flags and, importantly, mass leafleting of the crowd. 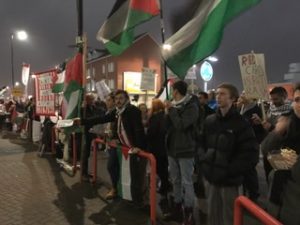 The leaflet we handed out Fair Play for Palestine puts pressure on UEFA to match the words of its President – “Racism, discriminination and intolerance have no place in Football” – with action.

It also rightly points out that sport and politics don’t exist separately and that boycotting South African sport helped end apartheid there.

The fact based evidence in the PSC leaflet contrasted starkly with the sparse leaflet given out by a handful of supporters of Israel on the night. It made great play that there were Arab players in the Be’er Sheva team, a fact that doesn’t change the racism and apartheid in Israeli football and society in general. One Israeli football team – Beitar Jerusalem – has no problem excluding Arabs from their team while the mass of its supporters celebrate their racism. Beitar feature in a shocking but important BBC Storyville programme which is available on BBC iPlayer. 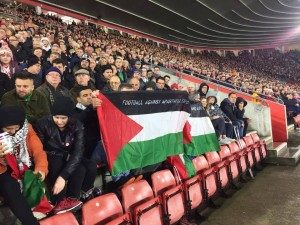 We found out later that the Palestinian flag was waved inside the ground making for a good display of solidarity which will be repeated whenever an Israeli club team or the National side plays here.