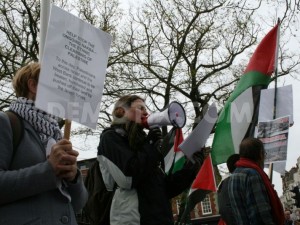 Activists in Brighton took to the streets today on a global day of solidarity marking 67 years since the Palestinian Nakba or ‘catastrophe’, in 1948, when the State of Israel was created. 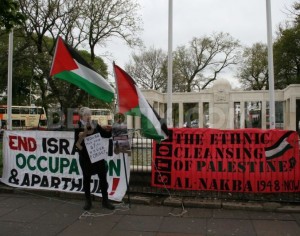 We gathered for two hours at the War Memorial in Old Steine Gardens – a setting chosen with care, as it was established as a space for remembering victims of warfare – combattants as well as civilians. 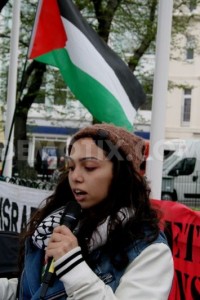 In a solemn act of rememberance, we read out the names of the hundreds of villages destroyed by the zionist militias as they ethnically cleansed the future state of israel.

We were joined by members of the local Palestinian community, with one member sharing with us a moving account of one family’s experience of The Nakba. You can read the text of his account here. 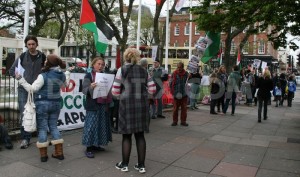 As always, the response from the Brighton public was hugely supportive. On a busy Friday afternoon, people stopped to take leaflets and to discuss the ongoing occupation and ethnic cleansing of the Palestinian people. 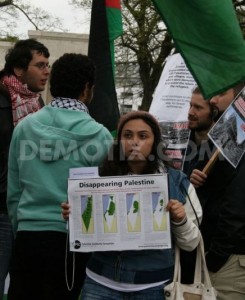 We hope that the people of Palestine – throughout the diaspora – will take heart when they see images from our commemoration and those of similar demonstrations around the world – on Twitter as #Nakba67.

‘Nakba’ means ‘catastrophe’; the name refers to the violent ethnic cleansing of the Palestinian people by the new state of Israel. During the Nakba in 1948-9, Israel killed 13,000 Palestinians and drove 750,000 from their towns and villages. Palestinian homes were blown up and villages flattened. Israel conducted brutal and cold blooded massacres of Palestinians including Palestinian babies. Palestinians fled to Lebanon, Jordan, the West Bank, Gaza and Syria. They have been in these refugee camps ever since, forbidden by Israel to return to their land.

Israel still continues to pursue the policy of ethnic cleansing and Palestinian people continue to be evicted daily from their homes, villages and land.