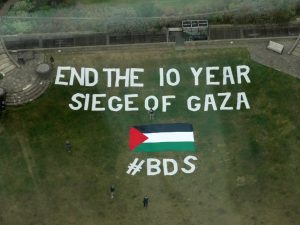 Supporters of freedom for Gaza installed an impressive message of solidarity in one of the open spaces in Brighton. This was at the foot of the new i360 tower on the seafront, which carries 200 people in a glass pod to a height of 450 feet. 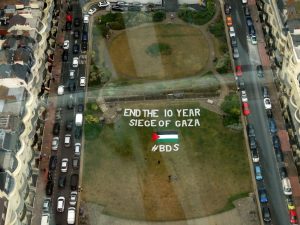 Passengers in the pod were so moved by the message that they photographed and filmed it and sent it to their friends via Twitter and Instagram. The photos have now been seen all over the world – including in Gaza!

Congratulations to the team that created this inspiring message. More photos below – and watch the video taken from the i360 glass pod as it ascends above the city!

END THE SIEGE OF GAZA!
END THE ARMS TRADE WITH ISRAEL!
FREE PALESTINE!
SIGN OUR PETITION CALLING ON AN ARMS EMBARGO OF ISRAEL!

GAZA – THE FACTS
Gaza is an ancient centre of habitation that has survived for 4,000 years, at various times in the face of marginalisation and destruction. Today it is under siege by Israel and kept alive through external funding and the ingenuity and persistence of its people.
The people of Gaza struggle to get enough drinking water and electricity, or to send their children to school.
Israel has repeatedly attacked Gaza in the most brutal way. The people are trapped, sitting targets in Israel’s continuous oppression of all Palestinian people. 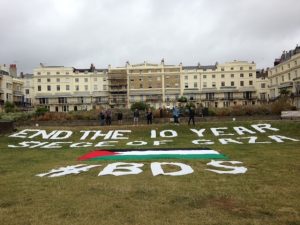 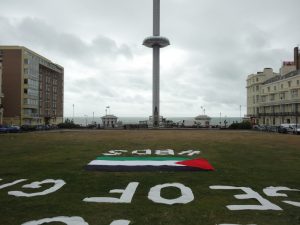 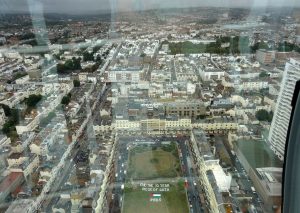