On Saturday 26 July we were treated to a bewildering display of zionist culture on the pavement outside the EcoStream shop in Western Road. For about 10 minutes, a transgender disco performer – apparently in a display of solidarity with the beleaguered shop – lip-synched and danced suggestively to tinny recorded music, and attempted to seduce the mystified passers-by.

The zionist counter-demonstrators had earlier issued a press release announcing this stunt, prompting the Brighton Argus to send a photographer. The photographer duly turned up, looked suitably puzzled, took a few snaps, shrugged and made his escape. But the Argus coverage of the event, which appeared the following Monday, gave our boycott compaign clear prominence, and represented it as a serious political effort. How the zionists imagined their weird stunt would bolster the shop and its supporters is a mystery. The event provided us with some decent unsolicited publicity for our campaign – see below. 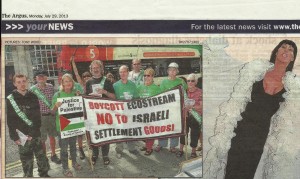