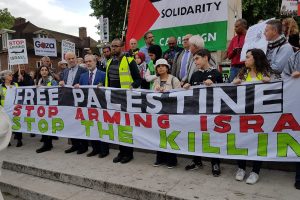 East Sussex Pension Fund (ESPF) has revealed that it has divested funds from Elbit Systems, Israel’s largest private arms manufacturer. This follows months of pressure by scheme members and supporters of Palestinian human rights who have lobbied the fund to divest from companies complicit in Israel’s violations of international law, including Elbit Systems. Since May 2020, campaigners have flooded council meetings with over 60 letters demanding the fund divests from Elbit.

In a public statement on the Council’s website, the Chair of the Council’s Pension Committee states that Elbit Systems is on the exclusion list of their pension fund manager, on the grounds of ‘Conduct-based Exclusions – Human Rights and International Law ‘, along with 37 other companies, including several that appear on the UN Human Rights Office list of companies with business dealings in illegal Israeli settlements in the occupied West Bank. Elbit was consequently dropped from the ESPF investment portfolio in late 2020.

Elbit Systems is Israel’s largest private arms manufacturer. It produces a range of weaponry deployed by the Israeli occupation army to murder or maim Palestinians. Elbit Systems’ Hermes 900 drones were among Israel’s drones that murdered 164 Palestinian children in Gaza in 2014.

Elbit has been subject to widespread divestment by a range of investors, including financial institutions HSBC after sustained campaigning led by PSC and War on Want, AXA and ABN Amro, and a range of European pension funds, including in Norway, Holland and Sweden.

In April 2020, PSC won a victory in the battle to defend the right to take action in the UK in support of Palestinian rights, overturning government guidance that restricted the ability of local authority pension funds to divest from companies violating human rights and international law.

Since then, scheme members, their representative trade unions, and supporters of human rights have been lobbying funds to take action and implement adequate screening and due diligence policies to address their complicit investments.

The campaign has been taking strides forward. In its engagement report for Quarter 4 of 2020 the Local Authority Pension Fund Forum (LAPFF), which includes the vast majority of LGPS funds and pool companies, began engagement with companies cited on the UN Human Rights Office’s list of business enterprises active in Israel’s illegal settlements, based on stolen Palestinian land.

Campaigners have welcomed ESPF’s exclusion of Elbit Systems but say the fund must go further, to ensure all companies complicit in Israel’s violations of international law are excluded.

“The exclusion of Elbit Systems is a great victory for scheme members in East Sussex. Elbit produce weapons that are used repeatedly in Israel’s war crimes against the civilian population of besieged Gaza. But the fund must go further and commit to exclude any company complicit in Israel’s violations of international law.”

“I’m relieved no more of my deferred wages will be invested in Elbit Systems, whose weapons are used to oppress Palestinian civilians. Going forward, the fund must act to ensure members’ wages aren’t invested in companies aiding Israel’s grave abuses of Palestinian human rights.