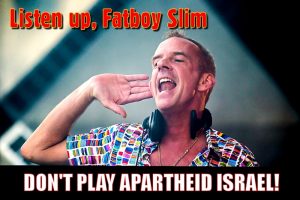 UPDATE! Brighton Argus covers our protest at Fatboy Slim’s appearance at the Brighton Half Marathon on Feb 26.

Many Brightonians will be shocked and disappointed to learn that Norman Cook (Fatboy Slim) – local celebrity and cultural icon – is scheduled to perform in Israel on the 12th of March.

Mr Cook may not be aware of the cultural boycott of Israel. It has been called for by Palestinian artists and cultural workers, and is endorsed by thousands of artists worldwide. The boycott supports the Palestinian struggle for freedom and self-determination, and protests against Israel’s brutal 50-year military occupation of Palestine.

In fact, more than 1200 UK artists have signed the ‘Artists for Palestine’ pledge to refuse invitations to Israel until it complies with international law and universal principles of human rights.

Many UK musicians have signed the pledge, including Elvis Costello, Jarvis Cocker, Eddi Reader, Roger Waters and Brian Eno. Kate Tempest, Guest Director of this year’s Brighton Festival, is a signatory of the pledge.

Israel benefits hugely in public relations terms when ‘western’ artists perform there: it helps Israel to shift its image from a rogue state to a hip and tolerant country.

We call on Norman Cook to cancel his gig in Israel and sign the Artists for Palestine pledge. If he does not, he will be supporting an apartheid regime every bit as despicable as the apartheid South African regime, which was brought down in part through cultural boycotts.

We will be demonstrating in the city over the next few weeks to raise awareness amongst Fatboy Slim’s local fanbase.