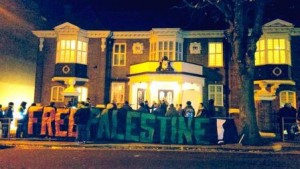 30 anti-racist and feminist demonstrators braved freezing temperatures last night to express their anger and indignation after local zionists failed to cancel a talk by Mordechai Kedar. Kedar is an israeli lecturer with an appalling record of racist and misogynist views. Despite cancellations of many of his other UK speaking engagements at synagogues and Jewish schools, following publicity about his outrageous statements, Sussex Friends of Israel provided him a platform at Ralli Hall in Hove. 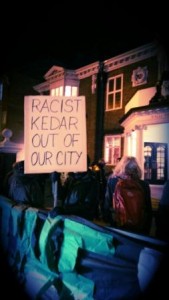 This is perhaps not surprising, in view of SFI’s consistent record of unquestioning support for israeli apartheid. What is puzzling is the failure of the Home Secretary, Theresa May, to deny Kedar entry to the UK. She has frequently exercised her power to exclude Palestinian visitors who posed far less of a threat to community relations. For example, in 2011 she banned the Israeli Sheikh Raed Salah from the UK after he was already in the country on a speaking tour. He had been invited by Members of Parliament. Sheikh Salah’s only crime was that he was hated by the Israeli Government for his truth-telling and human rights activism. This consistent demonisation of Palestinians, and simpering toadyism to the israeli regime, is unacceptable.

Mordechai Kedar served for 25 years in the Israeli Defence Force Military Intelligence. He is currently a lecturer in Arabic at Bar-llan University in Israel but he has also acquired a reputation for his controversial views on Islam, Muslims and immigration.

In July this year he drew widespread condemnation for saying female relatives of Palestinians should be raped. Asked his view about how to deter so-called Hamas terrorists, Kedar stated: 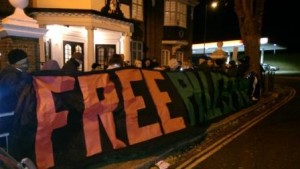 He has also spoken at meetings of the Stop Islamization of Nations group along with Tommy Robinson of the English Defence League and notorious US zionist Pamela Geller who has been barred from entering the UK.

Three scheduled events on his short UK tour have already been cancelled by the organisers or venues.

His visit to the UK has also attracted criticism in the Jewish press, with one commentator stating: “On past performance, his presence in the UK will be toxic for interfaith relations and is bound to offend Islamic moderates whose help is essential for the Prevent programme to combat jihadism. Above all, it undermines Jewish morality”.