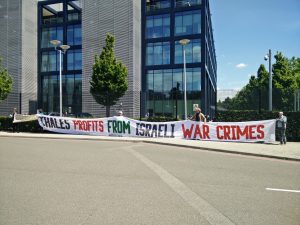 To mark the second anniversary of the assault on Gaza and the publication of the Chilcot report, activists from the south east took  a clear message to Thales arms factory  “You are profiting from war crimes and you are not welcome here!”

This followed a creative and lively demonstration outside Thales’ Crawley factory on 8th April 2016. (https://ssai2016.wordpress.com/)

At the same time groups and campaigners from across the UK were bringing a  noisy demonstration to Elbit’s factory in Lichfield (north of Birmingham) to demand that the UK stops arming Israel and that the factory close. 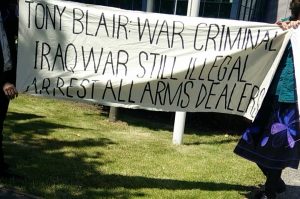 The assault on Gaza of two summers ago, which killed over 2,200 Palestinians, was one of the most brutal examples of Israel’s ongoing occupation and ethnic cleansing of Palestine. Each brutal assault on the Palestinian people is met with an escalation of campaigns around the world calling for an arms embargo against Israel.

Israeli arms company  Elbit, is manufacturing components in the UK and their factories are being exposed and blockaded. 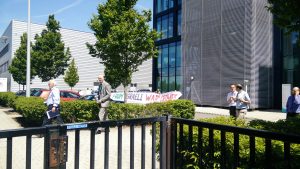 Today’s protests were part of a wider campaign to achieve an end to the lucrative two-way arms trade between the UK and Israel.

The UK’s Watchkeeper drone has been developed under a £1 billion joint venture contract awarded by the UK Ministry of Defence to Thales UK and Israel’s Elbit Systems, allowing the UK military to benefit from technologies that have been ‘field tested’ on the Palestinians.
The Watchkeeper drone project illustrates the collaboration between the UK government and Israel, and the joint working between private arms companies from both countries.
The Crawley factory is one of Thales’s largest facilities in the UK. Thales’ other sites have been targeted for protest by human rights protesters. For example, in September 2014 activists from Glasgow Palestine Action staged a protest at the Thales site in Govan (http://www.bbc.co.uk/news/uk-scotland-glasgow-west-29325338). Several of Thales’ sites in France have also been targeted for protest.

Protests at Thales arms factory in Crawley are an important part of the campaign for a two-way arms embargo against Israel, as called for by the Palestinian BDS National Committee:
“A comprehensive military embargo on Israel is long overdue. It would form a crucial step towards ending Israel’s unlawful and criminal use of force against the Palestinian people and other peoples and states in the region and would constitute an effective, non-violent measure to pressure Israel to comply with its obligations under international law.”

Ben Steele of Sussex Stop Arming Israel said:
“Two years ago Israel started yet another brutal and prolonged attack on the people of Gaza, which left 2,200 dead. Today is also the day that the Chilcot report is being published following a 7 year investigation into Britain’s role in the Iraq war. Yet, on this momentous day, it is business as usual for arms companies like Thales and Elbit. They continue to churn out their weapons technology to be used in the brutal atrocities of the future.

“We are sending a clear message to Thales that:
•    they are complicit in Israel’s war crimes against the Palestinian people through their joint enterprise with Israeli arms company Elbit Systems, and
•    arms manufacturers are not welcome in our communities.”