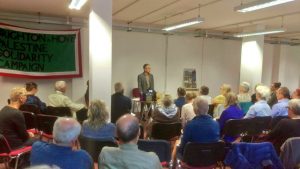 Brighton & Hove PSC had a very successful and well-attended Annual General Meeting on the 15th of June. More than 70 of our 265 members attended, to review our achievements over the past year and to plan next year’s activities. It was fantastic to see so many supporters and to be able to thank them for their involvement in the struggle for justice and human rights for the people of Palestine.

We were especially pleased to welcome Tom Suarez to Brighton as our special guest speaker. Tom is a professional violinist, a former member of major US symphony orchestras, and a former faculty member of Palestine’s National Conservatory of Music. He is also an author and historian, and has written extensively on the history of cartography. He is perhaps best known to solidarity campaigners for his book State of Terror: How terrorism created modern Israel (Skyscraper Books). He contributes regularly to Mondoweiss, the online site for news and analysis on Palestine/Israel.

The focus of Tom’s keynote talk was ‘Ending apartheid in the age of IHRA’. In his talk, Tom spoke of the need to resist the proliferation of the IHRA definition of antisemitism, and to call it out for what it is: an attempt to smear and silence solidarity campaigners. It should not be difficult to discredit the IHRA definition. It is logically flawed and politically inspired. Imminent figures – many of them Jewish – have added their voices to the opposition to IHRA. But Tom urged us to mount a more assertive fight-back – one based on the argument that the IHRA definition is itself antisemitic.

Tom argued that the IHRA definition perpetuates a pernicious trope about the Jewish people – that they all long to return to ‘the homeland’, and that this yearning is an essential characteristic of Jewishness. If this were true, then any attack on zionism could be construed as an attack on the Jewish people, and would therefore be antisemitic. But it isn’t true. We know that many Jewish people reject and repudiate the zionist project, so it’s a racist stereotype to say that they all identify with it, and that it is antisemitic to oppose it.

Tom also summarised some of the main themes in his book State of Terror – in particular, the systematic way in which, from the beginning of political zionism, violence and terror were seen as legitimate tools to deny the rights of the indigenous inhabitants to the land they had lived on for generations.