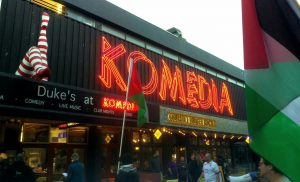 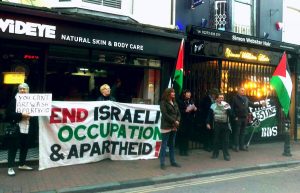 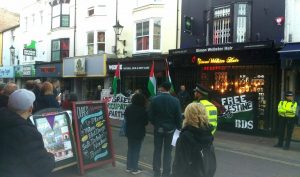 The film at Duke’s @ Komedia may have been a fantastic film.
That’s not the point.
The point is that the Seret Festival is being financed, and used, by the Israeli government to ‘art-wash’ Israel’s appalling human rights record, and its long history of flagrant violations of UN resolutions and international law.

Twenty prominent film-makers, including Ken Loach and Mike Leigh, have signed a letter to The Guardian, demanding that UK cinemas boycott the Seret Festival. “We cannot understand why cultural institutions continue to behave as if Israel is an ordinary democracy”, they write.

The Seret Festival tries to project Israel as ‘a melting pot of cultures, religions and social backgrounds’ rather than as an apartheid and colonial regime that has more than 65 racist laws discriminating against its indigenous Palestinian citizens. This includes the recently-passed ‘Nation-State Law’, which formally relegates Palestinians to second-class citizens. Two sets of laws, rights and citizenship – one for Jewish Israelis, and another for Palestinians.

This is straight out of apartheid South Africa’s propaganda playbook and illustrates the way in which Israel uses the arts to try to deflect growing condemnations of its violations of international law and Palestinian human rights.

The Seret Festival is sponsored not only by Israeli ministries and diplomatic missions, but also anti-Palestinian Israeli government-backed agencies, including the World Zionist Organization and the Jewish Agency. Both play a pivotal role in the planning of racist Jewish-only settlements at the heart of Israel’s illegal land grabs in the occupied Palestinian territory.

People of conscience and supporters of social justice worldwide are seeing through the smokescreen. As Israel’s popularity continues to dip worldwide, thousands of artists, including filmmakers Mira Nair, Ken Loach, John Greyson, The Yes Men and Mike Leigh, have heeded the Palestinian call, refusing to allow their art to be used to conceal Israel’s crimes against the Palestinian people.

By not performing or exhibiting their work in Israel, and by refusing to take part in Israeli government-sponsored events, artists send Israel a clear message that as long as it continues to deny Palestinian human rights, the cultural community won’t engage in business-as-usual relations with its regime.

In response to Israel’s atrocities in Gaza, the Oscar-winning star Natalie Portman has boycotted a ceremony in Israel that would have honored her. The singers Lorde and Rag N Bone Man have recently cancelled their gigs, in response to the call for boycott.

Help us pull back the curtain on Israel’s crimes and end the impunity that has allowed it to carry on its oppressive and criminal policies for decades.

Palestinians are asking people to support them by boycotting this festival. Your active support would send a strong message to them that they are not alone, and also a message to Israel that its actions and policies have consequences.