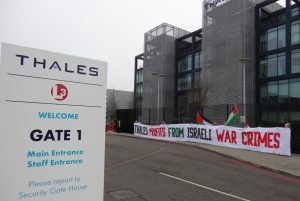 Human rights campaigners today held a demonstration outside the Thales arms factory in Crawley to protest the company’s collaboration with Israeli arms giant Elbit Systems in the manufacture of drones used against the Palestinian population of Gaza.

In parallel protests, there were demonstrations at other Elbit factories in the UK. Monday was therefore the first co-ordinated national day of action against Elbit Systems in the UK. 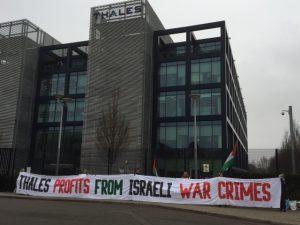 Activists from Brighton and Hove were joined by activists from Hastings and from the Crawley Green Party, who wished to support the ‘Arms to Renewals’ message of the demonstration.

The protest is part of a wider campaign to achieve an end to the lucrative two-way arms trade between the UK and Israel.

The UK’s Watchkeeper drone has been developed under a £1 billion joint venture contract awarded by the UK Ministry of Defence to Thales UK and Israel’s Elbit Systems, allowing the UK military to benefit from technologies that have been ‘field tested’ on the Palestinians.

The Watchkeeper drone project illustrates the collaboration between the UK government and Israel, and the joint working between private arms companies from both countries.

The Crawley factory is one of Thales’s largest facilities in the UK. The Crawley factory has been the target of several earlier protests in 2016. Thales’s other sites have been targeted for protest by human rights protesters. For example, in September 2014 activists from Glasgow Palestine Action staged a protest at the Thales site in Govan (http://www.bbc.co.uk/news/uk-scotland-glasgow-west-29325338). Several of Thales’s sites in France have also been targeted for protest.

The demo outside the Thales arms factory in Crawley was an important part of the campaign for a two-way arms embargo against Israel, as called for by the Palestinian BDS National Committee:

“A comprehensive military embargo on Israel is long overdue. It would form a crucial step towards ending Israel’s unlawful and criminal use of force against the Palestinian people and other peoples and states in the region and would constitute an effective, non-violent measure to pressure Israel to comply with its obligations under international law.”

The Crawley demonstration was organised by Sussex Stop Arming Israel (SSAI), a coalition of groups and individuals campaigning for justice for the Palestinian people by exposing companies in Sussex complicit in war crimes by the Israeli regime. SSAI is part of the wider global Stop Arming Israel movement, which in the UK campaigns for an arms embargo – an end to the deadly and lucrative arms trade between Israel and the UK (stoparmingisrael.org). This in turn is one element of the international movement for Boycott, Divestment and Sanctions against Israel in support of the Palestinians’ liberation struggle (see bdsmovement.net).

Ben Steele, one of the SSAI activists, said in a statement:

“We are joining human rights activists around the country today to draw attention to the deadly and lucrative arms trade between the UK and Israel, and its tragic human consequences for the people of Palestine. We’ll be outside the Thales factory in Crawley to send a clear message to Thales that: