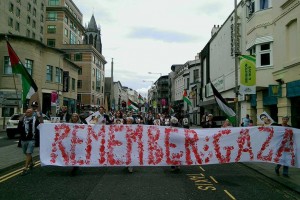 Our day of rememberance and protest
Saturday 29 August 2015

To mark the one-year anniversary of the 50-day assault on the people of Gaza last summer, we held a protest and a memorial procession through the city. 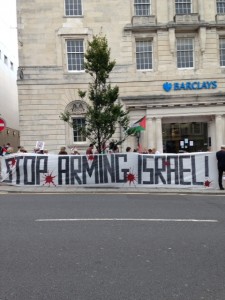 At 1pm we assembled outside Barclays Bank, in North Street, to demonstrate against the bank’s investments in the arms industry and to ask the public to boycott Barclays until it divests from its deadly profiteering.
We also made our banner, with the help of an enthusiastic public. It read ‘Remember Gaza’ in letters made up of ‘blood red’ handprints. 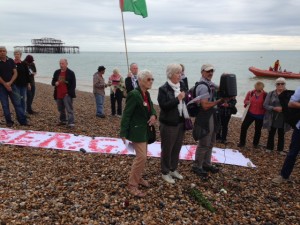 Then at 3pm, after a short speech from the local artist who created the 90 portraits of the Gaza victims, the activists carried the portraits and Palestinian flags in a silent procession along the seafront to Brighton’s Peace Statue. On the beach, after a recitation of poems by Palestinian poets Mahmoud Darwish and Walid Khazindar, red and white flowers were scattered in the sea, in memory of more than 2,200 Palestinians killed in the 50 day assault.