Brighton & Hove PSC regularly contributes to the national campaign to urge Sainsbury’s to put its ethical trading policy into practice, and stop doing business with companies complicit in the illegal occupation of Palestine.

After two years of corporate intransigence on the company’s part, we wanted to send a clear message to Sainsbury’s that they can’t keep profiting from the occupation of Palestinian land, so on Saturday April 18th we headed for the big Sainsbury’s in Lewes Road, Brighton.

The action was two-pronged. Team 1 headed for the roof top car park, and dropped a giant Palestinian flag with a clear message on it: “Sainsbury’s, STOP profiting from Israeli apartheid”.

The manager of the store asked the rooftop team to leave Sainbury’s property, and threatened to call the police. He was politely told that there is a really effective way to get rid of us, and it’s not to call the police: it’s to start behaving ethically and cease trading with dodgy companies. The manager noted our points. 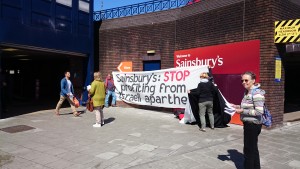 Team 2 leafleted shoppers at the main entrance, explaining why we are asking Sainsbury’s to stop trading with the companies that profit from the theft of Palestinian land, as well as the broader campaign to boycott all goods from Israel.

The public response was amazing. Passing cars tooted their support, and lots of people chose to go elsewhere to do their shopping. 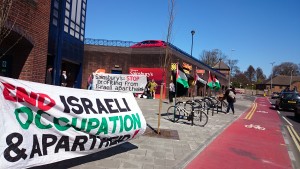