Waitrose – the supermarket that flaunts its ‘corporate social responsibility’ and its egalitarian employment practices – has teamed up with the Israeli Tourist Board to produce a special glossy insert for ‘Waitrose Kitchen’, their customer magazine. The 32-page insert is called ‘Taste of Israel Guide’, and is a shameless progaganda vehicle for the ‘Brand Israel’ project. You can find out more here. 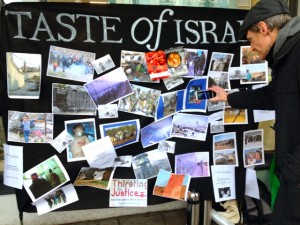 On Saturday Feb 21st we pitched our weekly Saturday stall outside the Waitrose branch in Western Road – not far from the shop formerly known as EcoStream – in order to expose Waitrose’s complicity in the attempt to normalise Israel’s appalling record of human rights abuses and violations of international law in occupied Palestine.

Beneath the title of the Waitrose/Israel magazine ‘Taste of Israel’, we displayed photos of Israel’s occupation – the wall, demolished houses, arrested children, checkpoints, and shocking photos of Israel’s brutal assault on Gaza last summer – showing the true tastelessness of the company’s partnership with the apartheid regime. Many Waitrose customers were genuinely disgusted to discover that their supermarket had allowed itself to be used as a pawn in Israel’s well-funded programme to prettify its image abroad as an attractive tourist destination for British foodies. 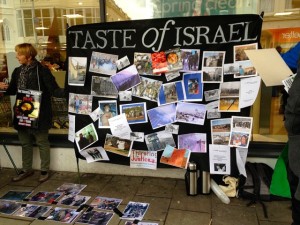 across the country, as people of conscience heard the news. In his reply to a letter from one activist, Mark Perrill from Waitrose Customer Service helpfully explained: “I’d like to assure you that Waitrose Kitchen is not political – we take adverts from a wide range of different businesses and organisations.” As the activist explained to Mr Perrill in her reply, “Not political? What else do you call it if you support racism and apartheid?… You must know that Israel, while passing itself off as an honest member of the trading community, in actual fact keeps expanding its illegal settlements in the West Bank and lives off the proceeds of land, water and other resources stolen from the indigenous population…I think Waitrose should be better than that.”

We and others around the country will continue to put pressure on the company until it withdraws its tasteless publicity for ethnic cleansing and withdraws from its partnership with Israel.