Waitrose – the supermarket in the John Lewis empire – continues to get flak over its decision to accept sponsorship from the Israeli State Tourist Board and publish a ‘Taste of Israel’ insert in its current edition of ‘Waitrose Kitchen’ magazine. 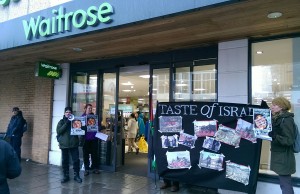 Brighton & Hove PSC were amongst the first group of activists to draw attention to the tie-in, and to protest online and outside the local store in Western Road (see ‘Tasteless Waitrose Exposed’).

The storm on social media continues unabated, with the supermarket’s own Facebook page receiving angry complaints and satirical postings, and Twitter in furious mode (see @BrightonPSC and @pscupdates, and also #TasteofIsrael). 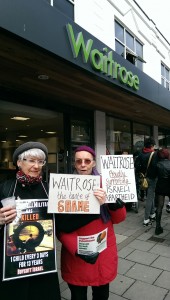 Now the national press has picked it up, with pieces in the Metro,the Independent, the Huffington Post, and the Daily Mail – causing further embarrassment to Waitrose, the supermarket that prides itself on its ethical trading policies and enlightened employment practice. Waitrose management are trying to hold the line that ‘Taste of Israel’ is ‘not political’, but this line is becoming increasingly difficult to hold when it is clear that the magazine glorifies ethnic cleansing and human rights abuses, and shamelessly re-brands traditional Palestinian culture as Israeli. 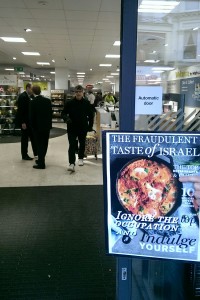 The Palestine Solidarity Campaign has submitted a complaint to the Advertising Standards Authority (ASA) about the “Taste of Israel” brochure on the grounds that its geographical inaccuracies, airbrushing of Palestinian history and attempts to pass off Palestinian food as Israeli amounted to false advertising. See Amena Saleem’s report on the Electronic Intifada for details.