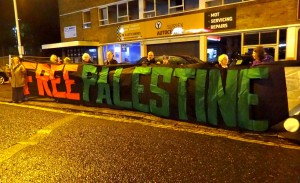 On Sunday November 2nd, people of conscience demonstrated outside a performance of the Pola Dance Company at the Ralli Hall in Hove. We wished to make clear our steadfast opposition to state-sponsored cultural exports from israel. These exports are an important part of israel’s determination to ‘re-brand’ its appalling image in Europe and elsewhere. As a representative of israeli apartheid, Pola Dance Company was not welcome here.

The Pola Dance Company is a dance troupe from Ben Gurion University – itself an integral element of the apartheid state. The dancers were earlier booked for two performances at the Edinburgh Fringe in August – at the height of the israeli assault on Gaza. A decision was taken by the venue in Edinburgh to cancel these performances at short notice, when it became clear that the shows were going to be opposed.

The decision by the zionist federation to reinstate the cancelled performances – but this time in Brighton rather than in Edinburgh – reflected their desire to neutralise the Edinburgh defeat. Brighton/Hove was no doubt chosen as the location with some care – not because the city is known for its love of israeli dance, but because the city is known as a site of controversy and contention in the struggle for justice and human rights in Palestine. A small private venue was hired (Ralli Hall in Hove) and publicity was tightly confined to supporters of the zionist federation.

Nevertheless, as a state-sponsored cultural export, performing under the auspices of the zionist federation, it was essential to signal opposition to the Pola performance, under the terms of the cultural boycott of Israel. A large group of pro-Palestine supporters gathered on the pavement opposite the venue for this very purpose. It was a dignified and non-confrontational protest, displaying a giant ‘Free Palestine’ banner, which drew occasional bursts of uncouth insults from the zionist activists entering the venue – as well as regular hoots of support from passing vehicles.

The ZF organisers, the dancers and their host university, the management of Ralli Hall, and indeed the israeli state and its supporters, would have been left in no doubt that state-sponsored cultural exports from israel are not welcome in Brighton/Hove, and will be opposed in a variety of ways until israel meets its obligations under international law.