The number of signatures has now exceeded the target of 100,000!
But please sign the petition if you haven’t signed already.
The UK parliament is now ‘obliged’ to debate the issue, so we need to apply even more pressure. 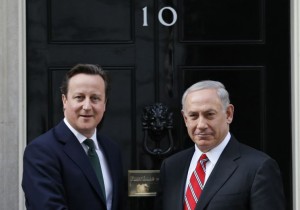 How do you feel about war criminals getting the red carpet treatment here? Hate preachers should be arrested, but surely we should also arrest people who have been directly responsible for the killing of thousands of innocents?

Our government is readying the red carpet for Benjamin Netanyahu, a man responsible for immense racial hatred, and who pulled the trigger on the slaughter of over 2000 civilians in Gaza last year. He continues to defy international human rights law with a siege that is maintaining over a third of a million children in trauma.

He should not get the red carpet. He should get handcuffs and be sent to a war crimes tribunal. Sign this petition to let our government know.

The petition is receiving attention from commentators around the world, including in Israel (see below). The petition received its first 10,000 signatures within a few days of its appearance. This means that the UK government is already obliged to respond to the petition (this applies to all petitions that receive over 10,000 signatures). You can read the government’s largely pro-israel response on the petition web page via the above link. Now that the number of signatures has exceeded 100,000 the UK Parliament is obliged to debate it. On this last point, we can predict strenuous resistance to this obligation on the part of the UK government (and indeed the ‘opposition’). If you sign the petition, pleased be prepared to take action to hold Parliament to account.